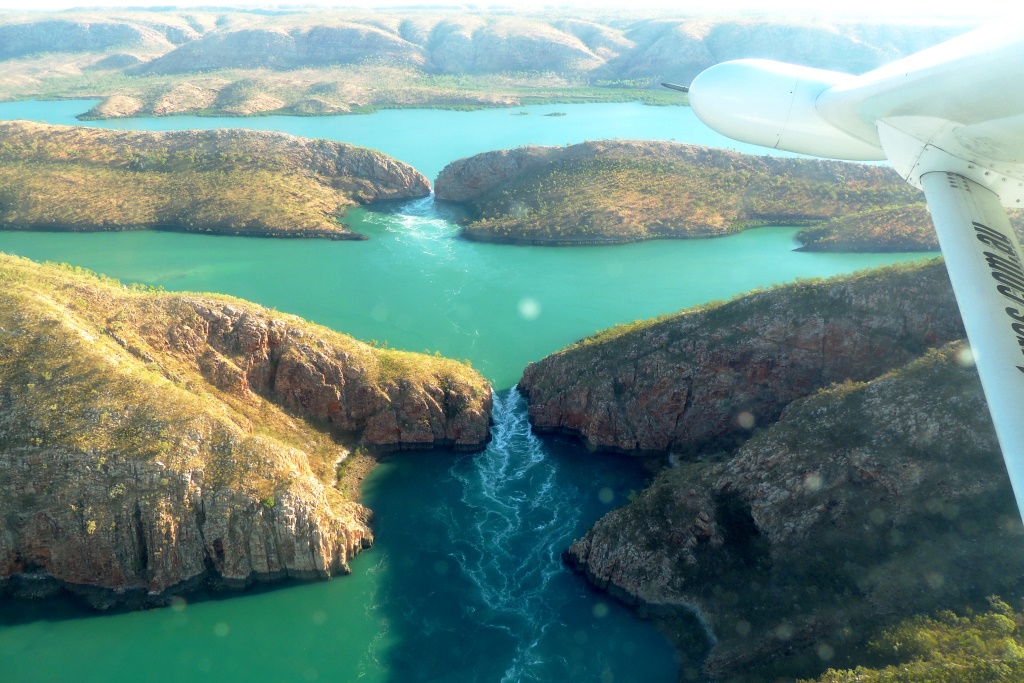 Highlights of week 4 have included photography around the coast in some weather conditions which provided a startlingly bright turquoise sea; and some tourist experiences. These included a visit to the crocodile farm; and Taste of Broome musical journey through the history of Broome. Week 5 has seen the completion of the first draft of our report: Youth Strategy Development for the West Kimberley: A Principles-based Approach; a trip by floatplane up the coast to Point Leveque, the Buccaneer Archipelago, and the horizontal waterfalls. We also travelled up to the hot and dusty AGMs of a number of Aboriginal organisations, held at Pandanus Park, 50 km South of Derby, and went on a fishing expedition to Willie Creek, a few kilometres to the North of Broome

The draft report was e-mailed out on the Wednesday of week 5 of our attachment. We are hoping to receive feedback on the report at our progress meeting on Monday, and to complete a final version by the end of Wednesday, after which we will have a wash-up and feedback session on the Thursday, and will then return back to Canberra via Perth on the Friday. The meeting at Pandanus Park provided an opportunity to meet with the majority of the key stakeholders for the report; although none of them had had the opportunity to read the report at that time, the discussions of the approach taken were positive.

As usual, the attached gallery provides some pictures from the last 2 weeks. For the pictures of the coast, there is little to add to the individual captions, other than to yet again observe that the colours in the pictures do not look real, but are in fact accurate. The crocodile farm is a wildlife park that has a significant breeding stock which supplies the associated crocodile farm. The tour was entertaining and enlightening, and was also livened up by a fairly significant fight between two of the crocs while they were being fed. Very impressive and full-on.

The Taste of Broome show featured a 7 piece local band and a couple of singers, who performed numbers spanning the timeline of Broome, while simultaneously illustrated by old pictures and film. This was surprisingly entertaining and provided insights into early Broome and its inhabitants. Some aspects, like pearl-diving, have gone. Others, like “the Roey” (the Roebuck Bay Inn) have endured.

The floatplane trip was spectacular and great fun. An action-packed, yet carefully managed day, with something for everyone, pretty much all the time. Floatplane flying is always fun, and the flight up the coast to Point Leveque, where we camped in the induction week, and then along the Buccaneer archipelago at low level was truly spectacular. The landing approach was down a narrow valley, and was followed by a smooth landing, following which we disembarked for an afternoon which included: feeding the sharks that loiter around the houseboat/pontoon complex that is the hub of the operation; an excellent Barramundi lunch; and a boat ride along the local lagoons.

The boat ride culminated in the passage (a number of times) through the horizontal waterfalls. The ‘narrow gap’ of the falls is only 7.5 m wide, and at peak tides, the tidal flow through the gap can generate a height difference of between 3 and 4m. Above 1.5m the fall is too dangerous for the boat to navigate; it was heading towards this by the time we left, and was pretty spectacular. The attraction is not just about the spectacle, however, these falls are a really unusual phenomenon and well worth a visit.

I had the good fortune to fly back in the right-hand seat in the cockpit of our aircraft, a Cessna Grand Caravan, and enjoyed chatting to the pilot and watching the operation on the direct flight back into Broome. Interestingly, the navigation system of the aircraft is hooked up to an audible warning system, which prompts the pilot to ensure the “Wheels are up” for a water landing, and “The wheels are down” for an airfield landing, just as described in Ron’s Two Up piece about getting a floatplane rating.

The annual AGMs for four of the Kimberley aboriginal corporations were held at Pandanus Park during our 5th week. Because we were trying to complete our draft, we attended only the final day, travelling up the evening before and camping out. The events are a very important part of the governance of the aboriginal organisations, and a great opportunity for networking, but also for cultural aspects, including language and dance. In the evening of our arrival, there was a series of spirited dances presented by three different groups.

Pandanus Park was very hot, 40 deg in the shade, and it was important to stay in the shade and drink plenty of water. Even so, in the heat of the afternoon, I sought out the refuge of the air conditioning in the car, and drove up to Derby for another look at the Jetty, this time with water racing in under the jetty as the tide came up.

At the weekend, there was a bit of a scramble first thing Saturday combining hiring a 4WD for the weekend, going to the markets to acquire last-minute presents for the family, and having breakfast. Then back to base to rendezvous with Nolan, who can best be described as a bit of a character. He has an encyclopaedic knowledge of where to catch fish at Willie Creek, and in due course, that’s what we found ourselves failing to do.

But as well as not catching fish, there was the fantastic turquoise sea to enjoy and to swim in. A bit cautiously, not only because there was a pretty ferocious tide running, but also because there is supposed to be a 6m croc living in the estuary. In the process of not catching any fish, we did discover the dangers of fishing, scoring two cut hands from sharp shells on the rocks (Jess and Elle), one hook snag and some bruises (Wendy), and a pretty severe graze to the leg (me) causes by a rock attack.

Once the tide had come in we shifted fishing spots so that Nolan could go spear-fishing. He promptly returned with two large Barramundi, a Black Bream and a Red Snapper. We then headed back to a deeper water spot, where Nolan caught a spectacular Blue-bone, a fish renowned as a great delicacy – and very big.

Outcome – apart from a few first aid dramas – Bream and Snapper cooked on the embers of a wood fire for lunch, and in the evening, the large Barra successfully fed 9 people for dinner. Plus fun and good humour all afternoon.