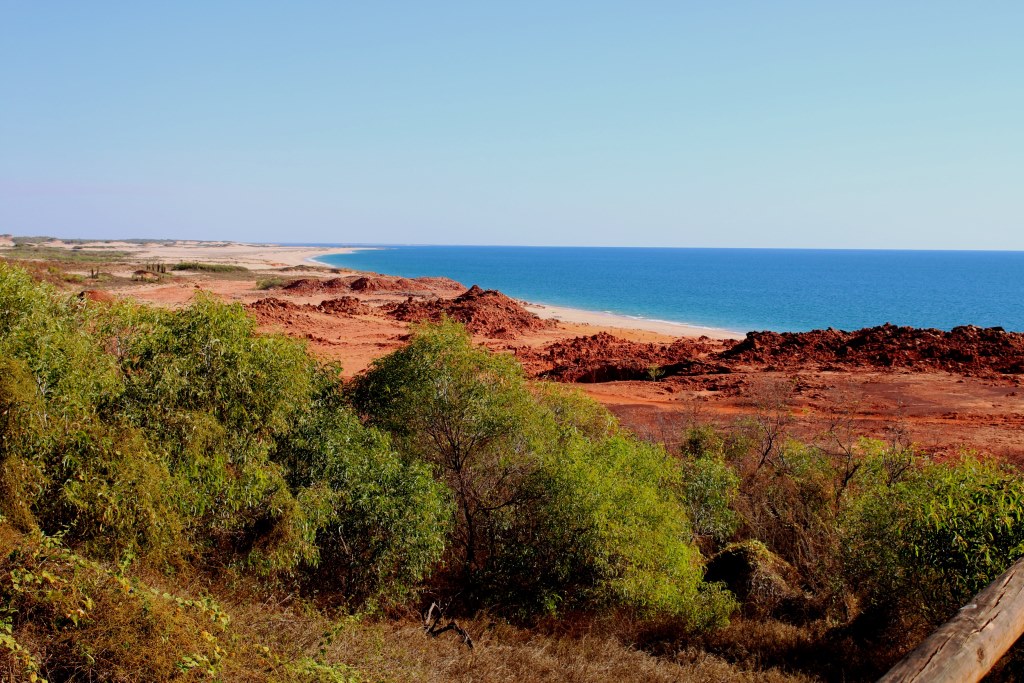 I have been in Broome for the last three weeks on an attachment from the Department of Defence to the Jawun program. This post gives an outline of the first week, which provides an induction into the program.

Jawun is an aboriginal word meaning ‘friend’, and the program supports aboriginal community-run projects in a number of locations across Australia. Over the last 15 years, a number of corporate partners have seconded staff who provide their experience and knowledge to progress projects and receive in exchange insights into the culture, country, lives, challenges and frustrations of the aboriginal community in Australia. The project I will be working on is a team effort, my colleague being Elle Schaefer, from National Australia Bank. Together we are to tackle the complex challenge of developing a Youth Strategy for the West Kimberley.

I have the good fortune to be seconded to Broome, located on the North-West coast of Western Australia, at the base of the Dampier Peninsula, the Northern tip of which is Cape Leveque. It is the dry (or tourist) season. The weather is just remarkably good – in 3 weeks we have seen clouds once, every day has been sunny and ~30C. No rain at present, just one perfect day after another, with beautiful sunsets in between.

The secondment starts with an induction week. The first introduction is to the coast at Entrance Point, on the Southern end of the Broome peninsula. What you discover here is that the sea is the definition of the colour aquamarine – a sea colour that I had never expected to exist. Moreover, the shore is made up of completely ridiculously orange rocks and cliffs. From here we go to Gantheaume point, the South-Western corner of the Broome peninsula. Here there are majestic cliffs, amazing sunsets, more aqua sea and dinosaur tracks and fossils. And a sweeping view along the West coast, where Cable Beach transitions to white sands, just to add to the spectacle.

The next day is spent meeting the key players from the key aboriginal organisations with whom we will be working. Such an impressive group of people; committed, passionate, intelligent, well-educated and proud of their country and their origins. The main organisations (in addition to Jawun) are Yawuru (pronounced Yaroo), who are the Traditional owners of Broome; the Kimberley Land Corporation, who have been successfully contesting land rights claims over the bulk of the Kimberley; Nirrumbuk, who deliver training programs and provide tradies services, and Aarnja, who are establishing an empowered communities program and representing communities across the Kimberley.

Next on the agenda is 4-wheel drive training. What fun – it is astonishing how quickly you can stop a large 4WD on a bright orange loose-surfaced road. The wonders of ABS brakes! This is just the start of a day driving on soft sand, over rough rocky terrain, and demonstrating the ability to change the wheel if need be. Plus learning how to manage tyre pressures – down for the soft stuff, up for the roads, in between for corrugated red dirt.

All this is in preparation for the trip up the Dampier Peninsula, then on to Cape Leveque. Getting to Beagle Bay involves putting the 4WD training into practice – 90 km of rough, dusty red stuff. At the Bay, we start with a tour which includes meeting the main groups with whom we will work the next day; a visit to the remarkable Catholic church, and a chance to set up our accommodation. Apparently our planned accommodation was over-run with snakes, so we ‘camped-out’ with our swags indoors on this occasion.

But before settling down, we headed out towards the bay for a barbecue and a special ‘Welcome to Country’, complete with a smoke ceremony where the ‘liyan’ of each person was cleansed by being bathed in the smoke of leaves which are used for this purpose, and which we were told also have medicinal properties. This was a special moment for us all, and was followed by an opportunity to meet with the Beagle Bay community and try local foods including ‘Bombshells’ (very hard to get into), Mud crab (delicious) and equally good fresh-caught fish.

The following day included a half-day’s community service. In my case this meant (largely) sitting in on lessons for young secondary school kids. The overall impression was that the brightest were very bright indeed, and that the class teacher was particularly inspirational when taking his English classes. And also very patient, as one or two of the children were finding it hard going.

Following lunch we headed on out up the peninsula to Cape Leveque. A very spectacular spot, with beautiful clear and warm water, glorious views and sunset, topped off by camping out in the swag under the stars at the top of the beach.

We headed out relatively early in the morning to attend Bundy’s spear-making day tour. This is based at Djarandjin, and has a program including visiting significant locations, clam and oyster harvesting for the ladies, spear making and unsuccessful attempted spear fishing by the guys. Total score – two mud crabs. Much patience required, both to make the spears, and to fail to catch anything. But nevertheless very entertaining and interesting, and yet more spectacular scenes on and around the various beaches. Following a makeshift lunch we headed off back down through the red dust to Broome.

On the last day of the induction week, we had the privilege of a whole day tour introducing us to the aboriginal history of Broome. Highlights included our guide, Jimmy Edgar, who has played an important part in maintaining knowledge of country, culture and history, and has been a key factor in the recognition of Yawuru as the traditional owners of Broome. Following a look at the midden overlooking the mangroves which was a key aboriginal settlement during the period when they were not allowed in the town, we moved on to Roebuck Bay, the principal source of sea food for the population, and hence full of history and interest.

We ate rock oysters, saw dinosaur tracks, heard about the medicinal and occasional harmful properties of the various plants, and then headed up to the Broome Bird observatory for lunch. After lunch we viewed the large variety of sea birds before mounting up again, and travelling cross country onto Roebuck Plains, to hear more stories of the importance of this country to the locals.

The tour ended on the remarkably beautiful Cable Beach, which Jimmy described as a sterile, dead place, and not to his liking. But, as he says, it takes all types.

So that was the first week. The ‘holiday’ week. Many, many photos were taken, and some of the better ones are attached.

Since then, week 2 has seen the opening of the Pearl Festival and a few more photographic excursions, and in week 3, I went off to Derby for a bit of a change of scene.

And of course, the serious stuff began – our projects kicked off. But more of that later – here are the photos from week 1.