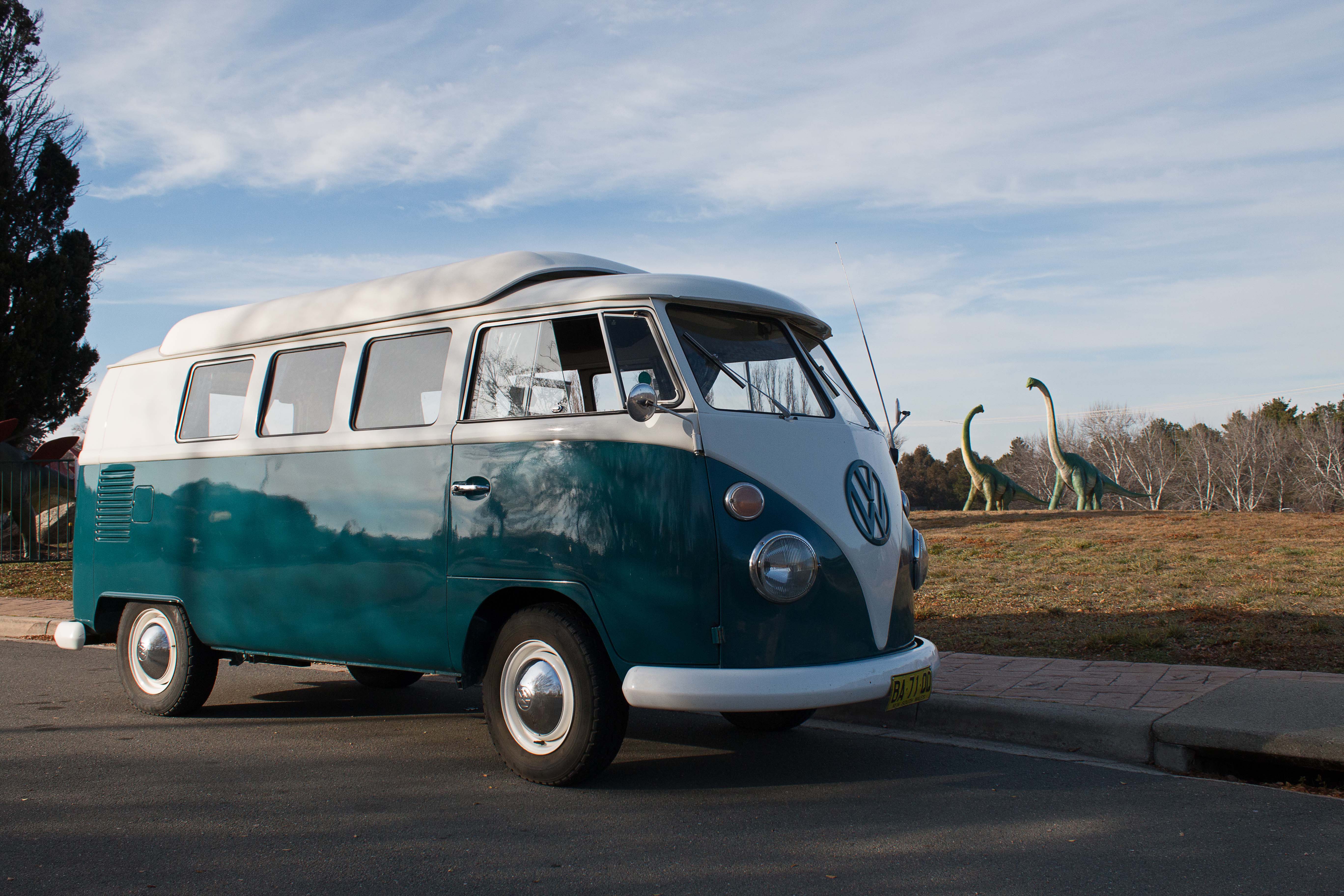 Over the weekend, Jim and Kris took the Kombi, Miss October, off to the small country town of Boorowa, along with some other members of the Canberra VeeDub Club.

Boorowa is about 120 km from Canberra, and with fine, although cold, winter weather was a very enjoyable drive through rolling agricultural land. A key attraction for the car enthusiast is the presence in the town of Penrose motors, who do fine restorations of classic cars, of which more later.

Our run was organised by Rod, one of the club members, who currently has his wife’s Karman Ghia at the Penrose workshop. The run from Canberra started with a meet-up at the National Dinosaur Museum, located at Gold Creek, just to the North of Canberra.

After some photography there, we set off, following initially the Barton highway to Yass, where we tuned South-West along the Hume Highway, which links Melbourne and Sydney. The drive was a little foggy to start with, and, despite being well wrapped up we were quite cold as we have no heating in the Kombi. After about 10 km we turned off down a country road taking us the 40 km or so to Boorowa.

Arriving at Boorowa, we pulled in to the Penrose yard, and viewed the fine collection of cars, including the Karman, which remains a work-in-progress. One of the stars in the yard/workshop was Fred Penrose’s Holden Ute, which had been awarded ‘Best Holden Ute’ at the Deniliquin Ute muster, a huge event which is held annually and attracts more than 800 Utes to ‘Deni’ every year. In addition, there was a VW speedster, a Type 3 fastback, a very well restored Morris Minor, the Karman and a really tatty Kombi shell.

The Kombi in Australia has become extraordinarily desirable, and this particular shell, which had no engine and no interior, and had the front axle of a Holden car where the engine and rear driveshafts ought to be, had been bought as a rolling rusty shell for $6000. The owner has asked the Penrose’s to restore it, and to transform it into a 23-window Samba. Among other things, this will involve fitting a new roof, which the owner is getting from the US, and cutting four extra windows into the shell. All this as well as making the body good, rebuilding the back end to actually have an engine, and fitting the appropriate interior.

It sounds impossible, but the Penrose’s recently rebuilt another Kombi which sold a couple of months ago in Melbourne for the incredible sum of $202,000.

A very enjoyable time was spent looking at the cars, and the Penrose’s were very interested in Miss October, remarking that my bus was better than the one they had restored that had been auctioned in Melbourne. We had a barbecue at the Penrose’s, and then had a relaxing afternoon exploring Boorowa, visiting an excellent shop selling art and woodcraft, and the Court Hoouse (now an information centre/shop/tearoom) where a truly excellent Devonshire Tea was enjoyed.

We stayed at the Boorowa Hotel, with the cars safely locked up at the Penrose’s and enjoyed drinks, darts, pool and a very good pub meal before settling in for the night. After a slightly slow start in the morning, we breakfasted, collected the cars and headed back to Canberra in the sunshine, pausing at Gold Creek on the way back for lunch and to look at the excellent Aarwun art gallery before heading home.

The gallery below gives a feel for the trip, with picture of the VWs, the cars at the Penrose’s and of Boorowa.